Russian President Vladimir Putin apparently has a soft spot for luxury watches, but some are wondering why the timepieces haven’t been hard on his wallet.

Putin’s collection of pricey wristwatches, are worth nearly $700,000 – about six times his official annual salary of 3,661,765 rubles, or about $115,000.. The Russian Opposition group Solidarity produced a video that  questioned how Putin could afford such a lavish collection, suggesting this was evidence of government fraud.

The crown jewel appears to be the Tourbograph, a $500,000 masterpiece by German watchmaker A Lange & Sohne. It boasts platinum casing, gold plated arms, sapphire-crystal glass, and a hand-stitched crocodile leather strap. The video shows him wearing the watch on May 12 of this year.

“Putin, it seems, did not eat or drink for six years to acquire this collection,” Boris Nemtsov, a former prime minister and Solidarity leader, wrote sarcastically on a blog. 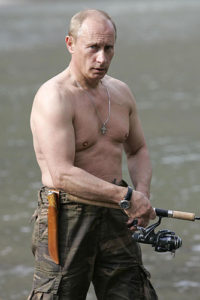 Putin has also been known to give the luxury replica watches away as gifts. He gave one of his watches, identified in the video as a Blancpain worth around $10,500, to a Siberian boy he met while on vacation in August 2009. He gave a similar watch to a factory worker in September 2009 and the video shows him tossing another Blancpain into wet cement at a construction site in August 2010. 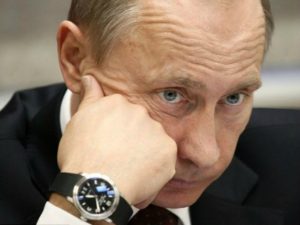 Russian President Vladimir Putin declared Crimea a part of Russia in a ceremony at the Kremlin. Putin was wearing the Blancpain Grande Date Aqua Lung, a limited edition from nearly a decade ago.

Putin is believed to use luxury yachts, hangs out in a $550 million palace overlooking the Black Sea, and reportedly owns shares in three major oil and gas companies. Putin may have a Net worth of 70 Billion dollars, which would make him one of the richest people in the world. All of this is kept hidden slightly out of view, but Putin knows that wealth and power go hand in hand.