Rolex is most known for their mechanical timepieces, but from 1970 through 2001 the company also produced battery powered and quartz wristwatches. In an attempt to keep up with the times, Rolex began research into electronic timekeeping in the early 1950’s and was awarded their first patent for an electro‐mechanical movement in 1952. 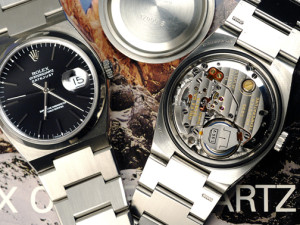 Despite the company’s early interest in the future electronic timekeeping market, though, the first Rolex quartz watch wasn’t made commercially available until 1970. This first model, the Rolex Quartz Date 5100, featured the Beta 21 movement which was also used by other Swiss companies including Omega and Enicar. The Reference 5100 was initially very popular with all 1,000 of its units selling out prior to delivery. The Reference 5100 was additionally significant as it was the first Rolex model to be fitted with both a sapphire crystal and a quick‐set date mechanism. Production of watch was discontinued in 1972 in order to allow the company time to develop its own brand of quartz movements.

After five years of development, Rolex released their first totally in‐house quartz movements in 1977; the 5035 (Datejust) and 5055 (Day‐Date). Known as the “OysterQuartz” watches, these movements featured 11 jewels, advanced circuitry, 32khz vibrators and thermocompensation that made them highly accurate‐‐the movements were certified to COSC quartz chronometer standards of ± .07 seconds a day. This was an improvement over the standards for Rolex’s mechanical movements of ‐4/+6 seconds a day, giving the OysterQuartz watches a technical edge over their classic mechanical counterparts.

The product life of the OysterQuartz watches was also put at about twenty six years, making them fairly reliable investments. Fittingly so, the watches sold fairly well‐‐due in no small part to their significantly smaller price tag. Mechanical watch movement pieces required highly qualified labor for both the manufacturing and assembling of the parts, making their respective movements fittingly expensive. Rolex’s quartz movements, however, lacked much of this detailed labor in their assembly and were therefore able to be sold much more cheaply. While this disparity in price between mechanical and quartz timepieces made the OysterQuartz watches more desirable to potential buyers, it made them less popular with watch retailers because their reduced prices made them less profitable products.

Very little marketing effort was actually made to promote the watches, outside of one notable advertisement featuring Mt. Everest climbers Edmund Hillary and Reinhold Messner. The headline of the ad read: “In 1953 they used Rolex Oysters and oxygen on Everest. In 1978 they managed without the oxygen.” (During their climb, Hillary had worn a mechanical Rolex and Messner an Oysterquartz.) Despite such advertisements, though, Rolex’s interest in maintaining its quartz line seemed to stay fairly low. It has been estimated that only around 25,000 OysterQuartz watches actually ended up being produced by Rolex in the 25 years the product line was active. 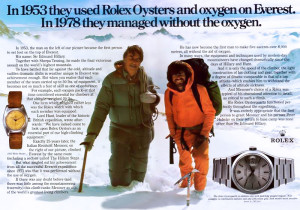 The last year any OysterQuartz watches were produced was probably 2001. This was the last year for a stainless steel quartz watch to appear in the Rolex catalog; the two‐tone and gold models remained until 2003. As rumor would have it, Rolex discontinued the production of the 5035 and 5055 movements with the intention of replacing them with updated alternatives; the 5335 and 5355 movements were each to feature 23 jewels and perpetual calendars. For reasons only known to Rolex, though, these new movements were never put into production. This put an effective end to the quartz movement era of the company after the remaining watches were finally shipped Rolex in Geneva.