In Victorian times, people would stop a house’s clocks at the time of an occupant’s death. Although this tradition continues somewhat today, there are some death clocks that weren’t stopped on purpose. Instead, they were broken by terrible circumstance, frozen forever to mark the last moments of disaster. These clocks are reminders of past tragedies.

The story of the Titanic is well-known. On the night of April 14, 1912, the ship struck an iceberg and ultimately sank into the North Atlantic during the early morning hours of April 15, taking approximately 1,500 people with it. Although there were many pocket watches and clocks retrieved from both victims and the ship itself, the most interesting one remains with the wreck.

This clock was located on the fireplace of the Straus suite, used by Macy’s founder Isidor Straus and his wife. Upon the dilapidated mantel, surrounded by sand and debris, sits a golden clock looking almost as new as it did the day it was made. Old pictures of the suite in its heyday show that the sinking did not affect the clock’s position at all. Its face, however, has seen some damage and is hard to read. 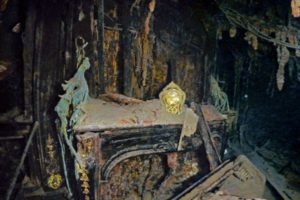 The city of Hilo, located on the Big Island, has itself faced two major tsunamis in the last century, the second of which was on May 23, 1960. One of the area’s famous landmarks, a green clock located in the low-lying suburb of Waiakea Town, survived the first tsunami but was heavily damaged by the second. Its hands are stopped at 1:04 A.M. the time at which the first massive waves hit the island.

The clock has been kept in this condition as a memorial to those who lost their lives and homes and still stands today. Waiakea Town no longer exists, its former lands having been replaced with public parks and green spaces. 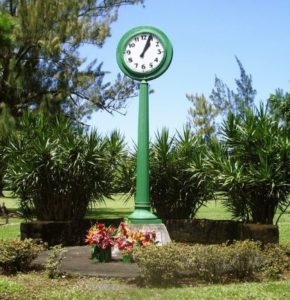 The bombing of the Alfred P. Murrah Federal Building in Oklahoma City, Oklahoma, was the deadliest terrorist attack in the US before 9/11. On the morning of April 19, 1995, a moving truck loaded with explosives detonated outside the building, killing 168 people and injuring more than 650 others. Three months later, the remains of the Murrah building were demolished so that a memorial and museum could be built on the grounds. 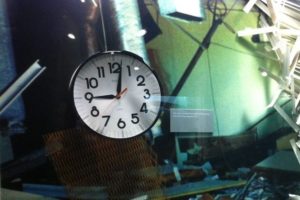 On August 6, the US dropped the first Atomic Bomb on Hiroshima, Japan. Roughly 100,000 people were killed in the attack, and everything within a 1.6-kilometer (1 mi) radius was completely turned to rubble.

In the aftermath of the bombing, this pocket watch was found. Even though the watch’s hands had been blown off, the heat of the blast had seared the time of the bombing onto the metal below, leaving the clock to always read 8:15 AM. 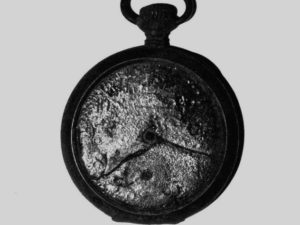 In the early morning hours of April 26, 1986, the Chernobyl nuclear power plant experienced a meltdown after a safety test went catastrophically wrong.  The power plant and nearby areas were blasted with radioactive energy, heat, and fire.

Deep in the heart of the reactor, where the radiation is strongest,there hangs an old clock, its hands stopped at 1:23:58 AM, the exact time at which the reactor exploded. 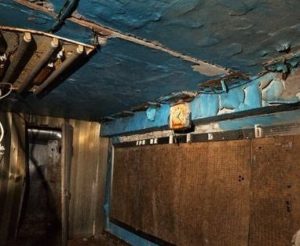 Joseph Smith, founder of the Church of Jesus Christ of Latter Day Saints, was killed on June 27, 1844, by a group of angry Illinois townspeople. Smith and a few other men waited in the Carthage, Illinois, jail for a trail. There, they saw a mob of around 200 men marching toward the building.

Although Smith was killed in the attack, his friend, John Taylor, miraculously survived. Taylor tried to escape by jumping from the jail window but was pushed backward by the force of a gunshot from below. The shooter had been aiming for Taylor’s heart but instead hit his watch, which he kept in his left vest pocket. The hands of the watch were stopped at 5:16 PM, approximately the time that Joseph Smith was killed. Taylor later took the watch to Salt Lake City, where he eventually became president of the Church of Jesus Christ of Latter Day Saints. The watch remains in the church’s archives to this day. 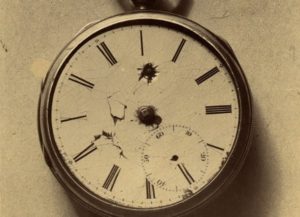 Railroad enthusiasts know the story of John Luther “Casey” Jones, a train engineer who  died saving his passengers during a collision near Vaughn, Mississippi. While approaching the station at , Jones and his signalman noticed something on the track ahead. They realized too late that it was the tail end of another train that was too long to fit its siding. The signalman leaped from the cab. A few seconds later, Jones’s train collided head-on with the other cars.

When Jones’s body was pulled from the wreckage later that day, it was found that his pocket watch had stopped at 3:52 A.M., the exact time of the impact. Although Jones died as a result of the crash, his actions ensured that he was the only fatality. 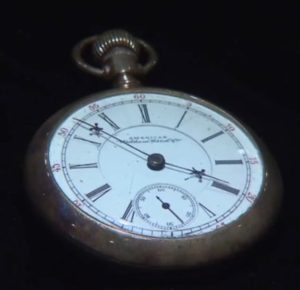