January 3rd, 1957, The Hamilton Watch company introduced the very first electric watch movement.  Called the 500, this watch used a battery to drive a complex gear train, which in turn pushed the hands.  The watch was not a commercial success and a decade later, the quartz crystal technology put the Hamilton 500 out of action for good.  The 500 was used in a few different cases, the most popular of which was the asymmetrical Hamilton Ventura. 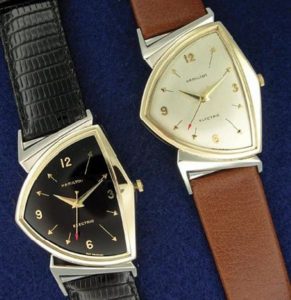 The heart of these watches is in their electrical contact systems. Unlike modern quartz watches with transistor circuitry, the Hamilton Electric has microscopic contact points physically making and breaking the electric circuit five times each second –18,000 times every hour. Inevitably this leads to wear on the tiny surfaces. During normal maintenance of Hamilton Electric watches, contacts and balance wheels were routinely renewed.

The critical contact wire/trip spring assembly consists of two very fine wires mounted to posts on the patent plate, which extend to the balance wheel as seen in the picture on the upper right. The picture below shows this assembly removed from the watch, with an ordinary dime as a scale reference. These wires are five times finer than a human hair, and they must be adjusted absolutely precisely. There is no margin for error in tension, height, length, angle, or position. Contact adjustment in the Model 500 is a time consuming, painstaking process which requires a great deal of skill and experience, as even the slightest irregularity in their adjustment will prevent the watch from functioning properly. 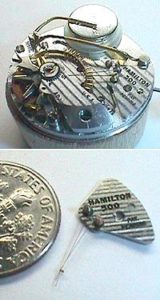 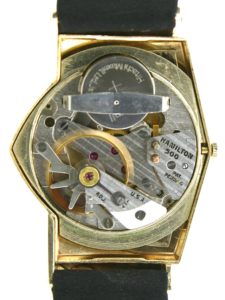 Introduced in 1959, this was a modest improvement over the original Model 500. The wire battery clip was replaced with a simpler clamp, and the shockproof jewels were modified. Otherwise it is virtually identical to the Model 500, with the same critical contact wires. 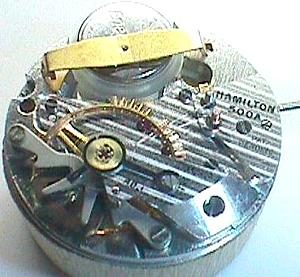 This significantly improved movement was released in 1961. The delicate contact wire and trip spring were eliminated, replaced by a non-adjustable contact on the balance assembly. It is thus a simpler and more reliable watch, however there was one downside to this improvement. The contact pressure is much stronger than in the Model 500 and as a result the contacts wear more quickly. 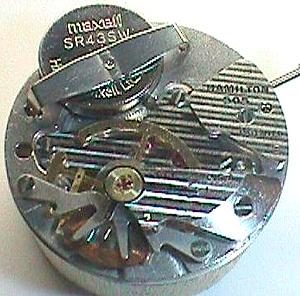 Elvis Presley has been so intimately linked to the Hamilton “Ventura” over the years that many people, collectors and non-collectors alike, still refer to it as “The Elvis Watch.”

Elvis wore a yellow gold “Ventura” very prominently in the 1961 movie Blue Hawaii.  In at least one scene it is shown in closeup and must surely have impressed many movie fans at the time. It is unknown whether the watch Elvis wore in that film was his personal “Ventura” or supplied by the studio. There are at least two museums claiming to own the watch from Blue Hawaii. 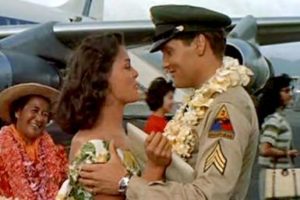 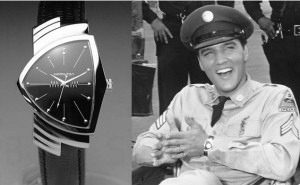 Author Rod Serling was captivated by the futuristic Hamilton Electric. He can be seen wearing his “Ventura” in the introductions to episodes of “The Twilight Zone.” 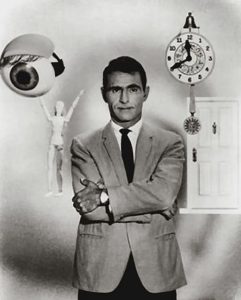 The “Ventura” is such a classic that demand has never abated. Recognizing this enduring interest, the Hamilton Watch Company decided to bring back the “Ventura” in 1988, twenty-five years after it had been discontinued. The new edition is technically a reissue rather than a reproduction since it differs from the original in two significant ways: the movement is a modern Swiss quartz model, and the case is not solid gold. Decades after it was introduced it remains one of the most popular watches in the Hamilton catalog.