If you want a watch that also can double as a stopwatch, purchasing a chronograph should be first on your to-do list.

But what about two stopwatches? That’s where the rattrapante, or split seconds, chronograph comes into play.

Deriving roughly from the French word for catch up, (pronounced ratt-ra-pont)  a rattrapante does just that — the watch features two stopwatches. That can come in handy if you’re trying to time multiple runners or competitors in a race simultaneously. 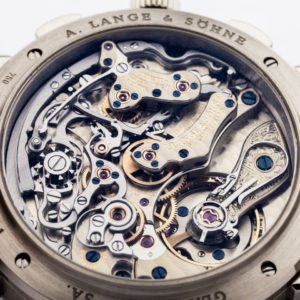 A regular chronograph is nothing more than a stopwatch added to a normal watch. A split-seconds chronograph looks like a conventional chronograph, but instead of one hand showing elapsed seconds, there are actually two, one directly above the other. The two hands are superimposed and when the watch is started, they move together, looking exactly like a single hand.

With a split-seconds chronograph you can measure both elapsed times. When the first runner crosses the line, you push the “split” button and one of the seconds hands stops, but the other continues to run. Push the “split” button again—traditionally, it’s mounted in the winding crown—and the first hand flies back to its position beneath the other. When the second runner crosses the finish line, push the stop button, and you can read off both the first and second place times.

The rattrapante is very similar to the flyback and the two are often mistaken for each other. The flyback lets you track multiple times, like the rattrapante, but does so without having to reset. A normal chronograph requires you to start, stop, reset and restart again.

The watch traces its roots to the early 1920s and is difficult to make with the different — literal — moving parts. The sheer complication and novelty of the watch has driven its market value. Replica Patek Phillippe’s 1922 watch was sold at auction in 1999 for just under $2 million.

On the retail market, you can purchase a rattrapante watch from anywhere in the $7,000 neighborhood all the way to more than $20,000.