All year long, left handed people have to live in a world that is made for “righties”. Doors, desks, tools, and so many other things in this world are designed for the convenience of righties. Have you ever seen a leftie write with a pen or pencil on a piece of paper? Odds are, they ended up smearing the ink all over the paper! Life for lefties isn’t always easy.

Left handed watches are really just “righty” watches with the crown on the other side. This developed as a natural reaction to the fact that people needed to wind their watches (while they wore them) on a regular basis. Thus, the orientation of a crown facing your wrist offered your opposite hand the most efficient means of winding your watch.

Here are a few watches that are made specially for lefties. 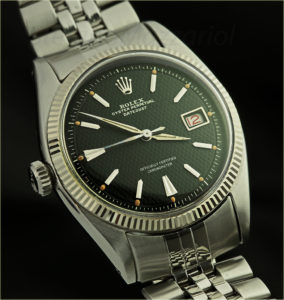 Former President Barack Obama is left-handed but he wears his watch like a “righty.”

August 13 is designated International Lefthanders Day by lefthanders International. It was first observed on Aug. 13, 1976. As the name suggests, it is meant to promote awareness of the inconveniences faced by left-handers in a predominantly right-handed world.

CHARLEY PHOTO OF THE WEEK: Charley received a basket from the Easter Bunny filled with special treats!