During the time between the first and second World Wars, flying was no longer news; it was commonplace. Planes delivered the mail via Airmail, and the US Postal Service employed a bevy of pilots. 25-year old Lindbergh served as a US Mail Pilot, running the route between St. Louis and Chicago. Veterans became barnstormers, daredevil stunt pilots who toured the country, providing the first airshows and offering the public a ride. The rise of general aviation meant a growing need for navigational accuracy, which led to Longines’ horological advances.

Being the official timer of the Olympics, Longines was a well-respected time keeper and a name that people knew. When Lindbergh flew his famed non-stop, solo Atlantic crossing, Longines timed the event; total time was 33 hours and 30 minutes. In 1927, Charles Lindbergh left Roosevelt Field in Long Island, NY and landed at Le Bourget Field in Paris, France to become an international sensation, a true celebrity. 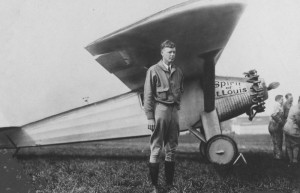 For his accomplishment, Lindbergh won the $25,000 Orteig Prize, which had gone unclaimed since its initial 1919 offering and claimed the lives of several pilots with its allure. To accomplish the trans-Atlantic feat, he flew a Ryan NYP, which he helped design . This was a fabric covered, single seat, high-wing monoplane named the Spirit of St. Louis. Imagine flying all that way across the ocean and keeping your bearings. Over the ocean, there is water, sky and clouds. For ships as well as for planes, determining longitude at sea is the trick, and Longines would rise to the navigational challenge. 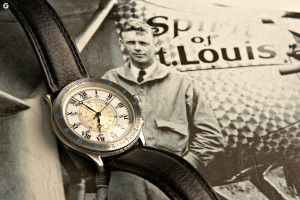 They produced a navigation watch that enabled calculating a precise location despite the accuracy shortcomings of the time. A discrepancy of a few seconds over time could mean a course deviation of several miles. Before Lindbergh collaborated with Longines, there was P. V. H. Weems, and the less familiar Weems watch was the base model of the Lindbergh watch, essentially making Lindbergh’s an updated and improved Weems.

The Lindbergh predecessor found a clever way to compensate for inaccuracy. In 1929, Navy Captain Phillip Van Horn Weems in conjunction with Longines (and Wittnauer) developed the Weems Second-Setting Watch for nautical navigation. The watch also quickly became an aeronautical tool. Given the turbulent cockpits and the thick gloves needed for altitude flying, the Weems was typically oversized. This 48mm watch’s distinguishing characteristic was its rotating center seconds dial. Pilots could listen to the minute beeps over the radio and adjust the dial, which maintained accuracy. The rotating inner dial displayed the correct minutes and graphically showed the margin of error from the original set time.

Lindbergh set out to update and improve the Weems watch based on his experience of flying over the Atlantic. He explained to Longines what he needed from a navigational watch, and the watchmakers went to work, with Charles Lindbergh giving his stamp of approval on the final product. In 1931, the Lindbergh watch was born. 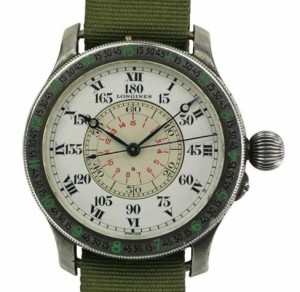 The updated watch allowed pilots more easily to determine the Hour Angle, the watch’s namesake, which is a technical description of finding longitude based on then Greenwich Mean Time. Lindbergh’s watch aided navigation with the addition of markings to dial and bezel that made the hour angle calculation easier. A pilot could now confidently determine his position even over miles of open water.

Here are 2 nice examples of Longines Aviation watches that I recently had the pleasure to repair. 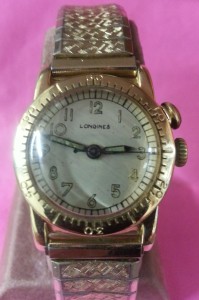 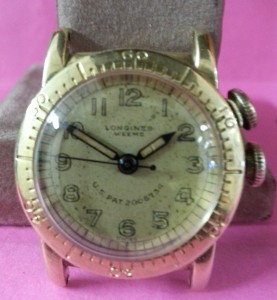