Every week I get this same phone call or email.  It goes something like this:  ” I just went swimming, or came out of the shower and now my watch is wet, or has moisture under the crystal.  The customer almost always says that they “have always worn the watch in the pool or shower” and can’t understand why all of a sudden it is wet.  At this point I start asking questions about the watch: what model do you have, how old is it, when was the last time that it was serviced, are you the original owner or did you purchase it used, etc.? I also ask them if it is currently running, if they can wind and set it and if there is just “fogging” under the crystal or water laying on the dial.   I am trying to get an idea of what condition the watch is in so that I can give the customer some idea of the repair cost.  Most customers are a bit annoyed that their rolex watch has now failed them, since it is an expensive watch and supposed to be able to go in the water.  I tell them that if moisture is in the watch, that you need to have it immediately serviced before the watch starts to rust because then we have major problems to take care of.   I tell them that if they can get the watch to me quickly, that I will put them to the front of the line and clean the watch as soon as it arrives to try and prevent the watch from being ruined.  At this point the customer is in a bit of a panic, since they have an expensive watch and are now in a bit of a time crunch to have it serviced.  Some have checked with their local Rolex dealer and found that the cost is going to be in the $800 range.   That is when they start doing an internet search and find me.   I try and  reassure them that if it is just a bit “foggy” and they get the watch to me quickly, they should be OK.

Rusty Rolex after taking off the case back 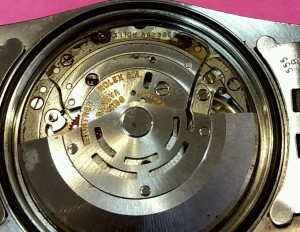 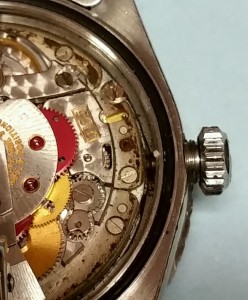 This man’s Datejust arrived at my shop about a month ago.  I immediately noticed the rust on the movement and gave the customer the estimate along with pictures of the rust so that he could see what we were up against.  I told him that I was hoping it was not too bad, but until I got the dial off and looked at the date, I could only guess at how bad the rust really was.  He gave me the go ahead and I started the repair.

Rusty stem and rust on the stem opening

I removed the stem and took the movement out of the case.

I could see that the stem was rusty, and there was rust on the side of the movement near the stem opening.

Rust in the Date and date Bridge

Once the dial was off, it still did not look too bad, so I decided to take the date bridge off.  This was my first mistake.  Two of the screws were badly rusted in place making removal a challenge.   I managed to get the bridge off, and what I found underneath quickly changed my mind on trying to repair this watch.  There was rust everywhere and now my biggest concern was just tring to get the watch back together before anything broke and then I would be in for a real nightmare.

After about 90 minutes from start to finish, I was able to get the date back together and put the dial and hands back in place so that it was in  the same condition as it arrived.  I emailed the customer with the bad news and told him that the rust was a lot worse than I had anticipated and this was not going to be a repair that I wanted to tackle.  I suggested that it may be time for a trip to the factory for them to repair, he actually may need a new movement.  The bad part is I had just spent over 90 minutes or more and was not going to get paid for any of my time.  I have gone down this road many times, and just chocked it up to a bad decision to even start on this one.

Most watches that arrive after fogging are normally not in this condition.  I can usually remove the surface rust from around the stem, do the overhual, change gaskets and we are back in business.  Unfortunately not every person is so lucky.   Water is a funny thing in a watch, some watches rust quickly, some take a bit of time.   There is no way to tell how a watch will react to moisture inside.  The one thing that I am certain of is “fresh watch” is not a bad as “saltwater”.  I have had a few watches come into the shop that failed while in the ocean, they have all been a complete disaster.  Salt water is very corrosive and will “kill” your watch in about a day.  So if your watch gets wet while in the ocean, you are in big trouble and you don’t have much time to waste.

After the rusty watch is repaired

Once the overhaul is done on a rusty watch, I normally give them the “speech” and preach the word of “keep your watch as clean and dry from now on”.  Most rolex customers still dont like to hear this, since they are under the impression that their watch is “waterproof” and will somehow last forever.  Unfortunately, both of those facts are incorrect.   Nothing is water resistant for life and their watch will not last forever. I always tell them that the best way to prolong the life of their expensive investment is to keep it out of water. I have been a watchmaker for almost 40 years and rust is the single biggest problem that I have to deal with. It takes a simple repair and turns it in to a major project.

I am not sure how many people take my advice, but this blog is going to show you what can happen when a very nice Rolex gets wet.