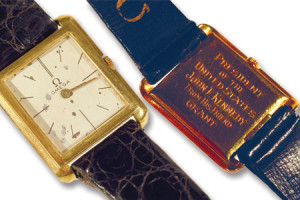 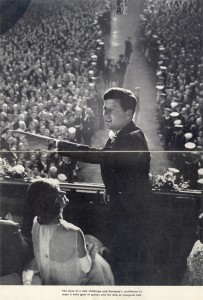 When President John F. Kennedy took the Oath of Office on January 20, 1961 he did so while wearing an Omega Ultra Thin (Reference OT3980). The watch was given to him by then Florida senator Grant Stockdale and included the inscription “President of the United States John F. Kennedy from his friend Grant” on its caseback. While Kennedy had the watch in his possession from the start of his presidency, he was actually given it months earlier (inscription and all), before he’d actually won the November election. Grant Stockdale was apparently very confident in the abilities of his friends. 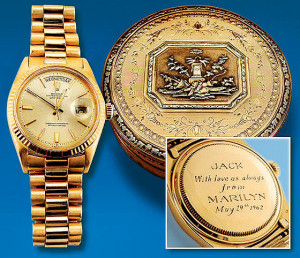 Although not in his possession for very long, the most infamous watch ever “owned” by President Kennedy was a gold Rolex he received in 1962 for his 45th birthday. The watch was given to him by actress Marilyn Monroe and bore the inscription “Jack / With love as always / from / Marilyn / May 29th 1962” on the case back. The president was afraid that such a gift could create rumors of an inappropriate relationship between the actress and he, and ­­according to the story ­­gave the watch to his aide Kenneth O’Donnell with a note instructing him to “get rid of it.” In 2005 the watch sold at auction with its antique box and a love poem Monroe herself had place inside. 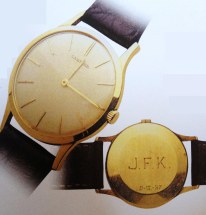 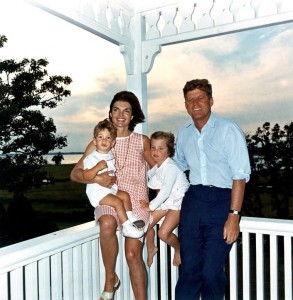 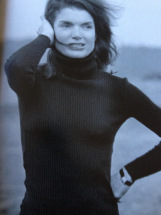 After Grant Stockdale gave the President an engraved Omega as a gift, Jacqueline Kennedy wrote Stockdale a letter wherein she joked that his gift was “nicer than the watch” she’d given her husband. It’s unknown which specific watch her letter intended to refer, but it is known that Mrs. Kennedy gave her husband a watch years earlier as an anniversary present. In 1957 on the four year anniversary of their marriage, Mrs. Kennedy gave her husband an 18 carat gold Louis Cartier Tank watch. The watch was inscribed with the President’s initials, the Kennedy’s family arms, and the couple’s wedding date. This gift from his wife would be the last watch the President would ever wear, as it was on his wrist on November 22, 1963 when he was assassinated in Dallas, Texas. After his death the watch was removed from the President’s arm and given back to the First Lady, who then eventually gave it to the President’s secretary, and then to collector Robert White. 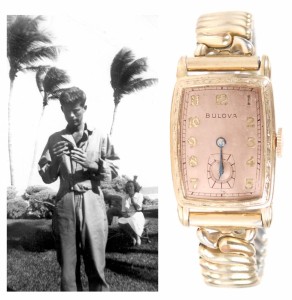 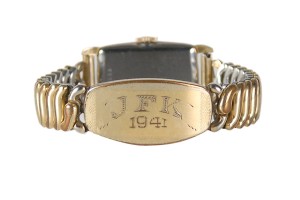 Originally given to JFK by an interested lady in 1941 at a Washington, DC dinner, the Bulova was fitted with a stretch bracelet with a small, curved plate at the bottom – perfect for engraving. Kennedy has “JFK 1941” inscribed on the outside of the plate and it is still crisp and highly legible today. 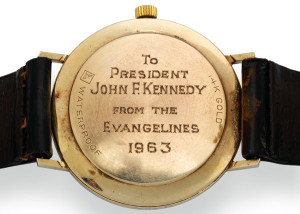 In 1963 Kennedy was given a Nastrix watch by the Washington socialite couple of David and Evangeline Bruce. The couple had been major supporters of Kennedy’s presidential campaign, and gave the President the watch as a “thank you” after he appointed Mr. Bruce as the US ambassador to Great Britain. The back of the watch bears the inscription “To President John F. Kennedy from the Evangelines 1963.” The self­winding, water­resistant piece featured a 14­karat yellow gold case and was, according to the President’s secretary, Evelyn Lincoln, worn frequently by the President during his morning swims. After the President’s assassination, Ms. Lincoln made sure the watch got back to Kennedy’s widow. In 1968, Jacqueline Kennedy married Greek shipping magnate Aristotle Onassis and on their third wedding anniversary (Oct. 20, 1971) gave him the same Nastrix watch as a gift after having a new inscription added; “FALJ” (standing for “For Ari, Love Jacki”) was inscribed between the lugs on the watch case.