The First Automatic Chronograph to be Worn in Space

For many years it was believed that the first automatic chronograph  to reach outer space was the Sinn 140 model worn by German astronaut Reinhard Furrer during the Spacelab D1 mission in 1985. The watch still is fairly popular with collectors and watch enthusiasts today because of this achievement. In 2007, though, a new revelation came to light that essentially retroactively negated much of the model’s historical significance; not only had another automatic chronograph been used in space first, but one was used over a decade beforehand without anyone knowing. 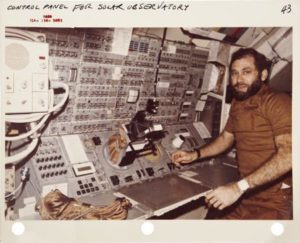 The actual first automatic chronograph worn in outer space was the Seiko 6139. The watch was worn by Lt. Colonel William Pogue during the 1973-­1974 Skylab 4 mission, for which he was the mission pilot. This was confirmed by Pogue himself after a man named David Bruno­­a self­described “avid watch collector”­­ began a letter correspondence with the former astronaut around 2007. (The letters can be viewed here: http://tinyurl.com/hfhen85 .The mission itself lasted 84 days and brought the third and final crew to the first American space station, where they worked for almost three months on a number of different projects. One reason why the watch’s journey to outer space was never recorded, was probably due to Pogue’s sneaking it on board the mission spacecraft in the first place. 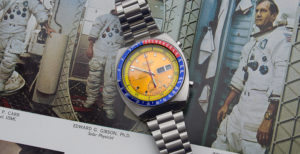 While NASA had given the astronauts official Omega watches to wear for the mission, they were not given the watches until “late” in their training. During training, though, Pogue used his own Seiko 6139 for timing the engine burns of the training spacecraft simulator, and wanting to continue using it for the actual mission because he was more accustomed to it. Because NASA was so late in providing them with their official “work” watches, Pogue brought his Seiko along for the mission without ever asking for official approval first. Before liftoff, he placed the watch in a suit leg pocket and kept it there until the spacecraft reached orbit. After reaching orbit and changing out of his flight suit, Pogue wore both of his watches at once, switching his Omega (set to Greenwhich Mean Time) to his right wrist his Seiko (set to US Central Time) on his left. 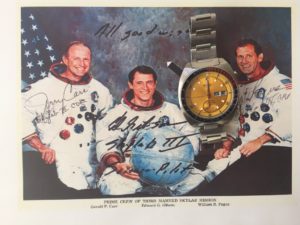