Accurate timekeeping supports much of our modern world. Global positioning systems, for example, need to be accurate to within about a billionth of a second in order to keep users from getting lost. Satellites for these systems rely on high precision measurements coming from atomic clocks at the U.S. Naval Observatory. GPS are also used for synchronizing digital networks like cell phones and the NTP servers needed to maintain the internet.

An atomic clock is the most accurate type of timekeeping device in the world, designed to measure time according to vibrations within atoms. A group of atomic clocks located across the globe are used in conjunction with one another to accurately establish Coordinated Universal Time (UTC).

In 1945, Columbia professor Isidor Rabi proposed that atomic vibrations could be used to keep time. Four years later, the National Bureau of Standards announced an atomic clock that would measure the vibrations of ammonia molecules.

Although this first American atomic clock was less accurate than a then modern quartz watch, it demonstrated that atoms could be used for timekeeping. The first accurate atomic clock was developed at the National Physical Laboratory in the UK in 1955, and used caesium-133 atoms.

Louis Essen and J.V.L. Parry standing next to the world’s first caesium atomic clock, developed at NPL in 1955. 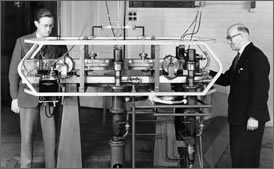 Like regular clocks, atomic clocks measure time based on oscillation, which is to say, how fast their moving parts move back and forth. For a clock with a pendulum, for example, the “oscillation” is the back and forth movement of its pendulum. This kind of clock keeps time based on the frequency and speed of its pendulum’s swing. Because of how many factors are involved in the swinging of a pendulum, a clock of this type will have varying degrees of accuracy. Atomic clocks are much more accurate because of their use of atoms in the measuring process; the idea being that if an atom is made to vibrate, it will always vibrate at the same frequency, thus making for a highly accurate medium for measuring time.

On 3 April 2014, the National Institute of Standards and Technology (NIST) in Boulder, Colorado launched their newest standard for measuring time using the NIST-F2 atomic clock, which had been under development for more than a decade. The new machine was accurate to one second in 300 million years, according to the NIST. Later, it was certified by the International Bureau of Weights and Measures as the world’s most accurate time standard. Both NIST-F2 and the standard it replaced, the NIST-F1, are known as cesium based atomic fountain clocks. This meant they determined the length of a second by measuring a natural vibration inside a cesium atom. Inside the clock lasers push together a ball of about 10 million cesium atoms and cool them to near absolute zero ( –273.15°C or –459.67°F) with liquid nitrogen. The ball is then tossed up in a 3 foot chamber where it passes through a microwave beam. The microwave beam bumps some of the cesium atoms into a higher energy state, which causes them to give off light. After a single atom has moved between two energy levels 9,192,631,770 times, one “second” has passed. 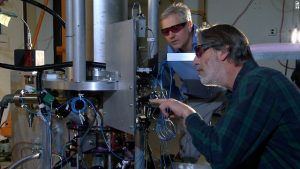 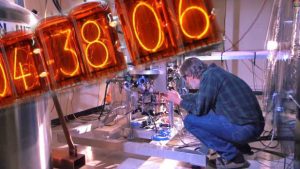 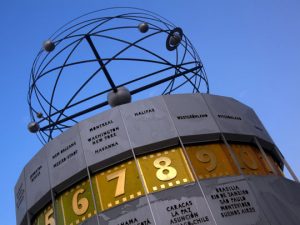 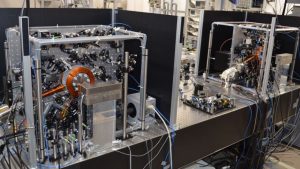