An atomic watch is a wristwatch that is radio­-controlled to keep the most accurate time on earth. An atomic watch never needs to have its time or date set/adjusted because it receives a low ­frequency radio signal each night that keeps it perfectly synchronized with the US atomic clock in Colorado. The watch’s built ­in antenna searches once a day for the 60 kHz radio signal emitted from Ft. Collins and decodes the signal in order to update its time. This radio ­updating process accounts for Daylight Saving Time, leap years, and leap seconds as they occur. The transmitter in Ft. Collins has a broadcast radius of 1,864 miles, making its signal available to most of the United States, but not Hawaii or Alaska; if a US atomic watch travels outside this range (say, overseas) it will function as a normal quartz watch but won’t regularly be able to update its time. While Europe has similar systems in place for its own atomic watches, the transmitter frequency is different and incompatible with its American counterparts. While this type of watch does update every day, their updating capabilities are limited; while atomic watches will always update to be “on time,” they aren’t able to adjust their times relative to the time zone they’re currently in because they lack GPS software. This means that when crossing timezone lines, the watches will still need to be adjusted. Many atomic watches allow the wearer to check the time of their last synchronization, as well as options to manually make the watch search for the synchronizing radio signal. While most of these watches are set to automatically update at night (when radio interference is at its lowest), there are certain factors which can make this more difficult for the watch’s software. If a watch is in a building with excessive shielding, a protective safe, laying next to other electronic equipment, or being close to power lines its updating process might not work properly.

An atomic watch can be battery or solar powered. Since the watches usually have no stem for manually setting the time, after a battery change they will not display the proper time until receiving its daily update signal. If you make one of these watches manually search for the signal, its updating could happen within a few minutes, but if the watch cannot find the signal it can take up to a few days for it to begin displaying the proper time again.

Citizen released the world’s first multi-­band atomic watch in 1993. Because metal in the case and movement could interfere with the watch’s ability to receive the radio signal necessary to keep it accurate, the relatively large antenna was placed straight down the middle of the watch dial. Ten years later in 2003, Citizen released the world’s first light­-powered radio controlled watch with an entirely metal case after finding a way around their radio interference problem. 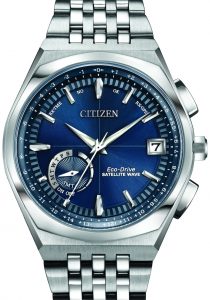 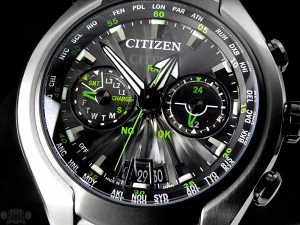 More recently, Seiko also released an advanced atomic timepiece of their own. The Seiko Astron (released in 2012), is a solar­-powered GPS ­aligning atomic timepiece. Unlike other atomic watches, the Astron is able to receive GPS satellite signals and automatically adjust its time based on its current position on Earth ­­in any timezone. While other atomic watches must be in range of certain atomic clocks located around the world in order to synchronize their times, the Astron receives its radio signals from satellites, allowing it to receive updating signals from anywhere in the world­­ from the middle of the ocean to the middle of the desert. 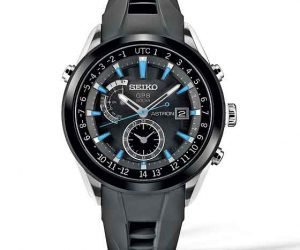 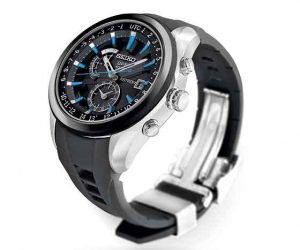 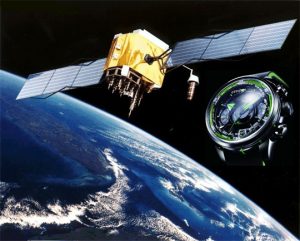