The Omega Constellation watch was once the flagship in the Omega collection. This particular family within their collection dates back to 1952.

The first Omega Constellation models had bumper movements and distinctive diamond shaped hour markers.  The Dauphin hands were used till the late 1960s.

After a few years, around 1955, the Omega caliber 354 bumper movement with chronometer rating was replaced by the caliber 50x series. This movement had a normal rotor and came in several versions (date/no-date). In 1959 this range of movements was succeeded by the caliber 55x (nodate) and 56x (date) movement families. 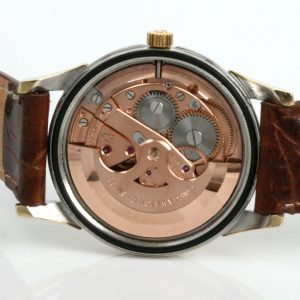 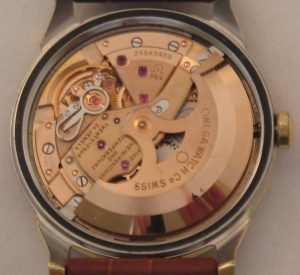 One of the things that make the Constellation stand out from the other Omega families of that time, is that the dials on these Constellation models were richly decorated. The use of gold dials, gold hour markers, onyx hour markers, gold hands and gold applied logos and wording is something that wasn’t seen on any of their other collections to this extent. Some of the gold dials had a satin-brushed finish, others had a sun pattern or a cross-hatched dial. There were many different dials available for the Omega Constellation in the 1950s and 1960s. 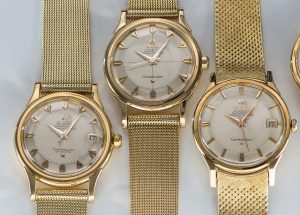 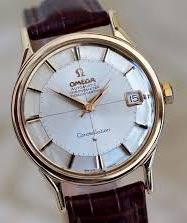 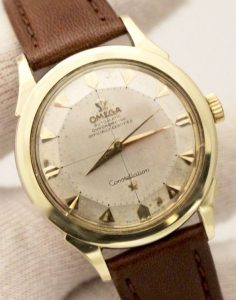 Another thing that makes the Constellation attractive to a lot of collectors are those nice fancy lugs. Those early Omega Constellations have rounded lugs and were later a bit more restyled to the 1960s. 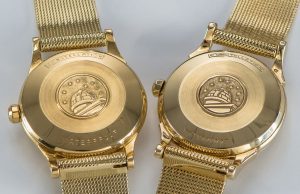 In 1982, Omega introduced two new series of watches in their Constellation and Seamaster line. The new Constellation ‘Manhattan’ watch was introduced with a quartz movement with a chronometer certificate. The quartz movement, Omega caliber 1422, was based on an ETA Flatline II movement. Chronometer specifications for quartz models, are far more strict that the specifications for mechanical movements of course. The ‘Manhattan’ Constellation had an integrated bracelet, available in either stainless steel or gold/steel. The sapphire crystal was placed on top of the shiny polished black bezel and 4 little ‘claws’ held the crystal in place. The dial of the watch had applied roman numerals. In 1985, Omega also introduced the mechanical automatic version of this watch. This automatic movement, caliber 1111, was based on ETA caliber 2892-2. Chronometer certified. In the years after, Omega introduced some more Manhattan models, including a day-date model and models with leather straps instead of the integrated bracelets. 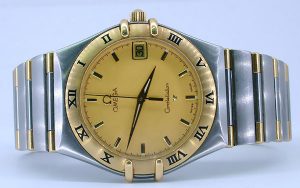 In 2003, the Constellation gets a new partner. The Constellation Double Eagle! This watch is a large version of the regular Constellation and features a co-axial caliber 2500B chronometer certified movement. The quartz version, caliber 1680, has a battery life of 5 years and a perpetual calendar. The Double Eagle measures 38mm, a lot bigger than the 33.5mm and 35.5mm diameter Constellation’95 models. Since 2004, the Double Eagle is also available as a chronograph watch. The caliber 3313 movement, based on a F.Piguet ebauche, also features the co-axial escapement and a column wheel mechanism for its chronograph functionality. 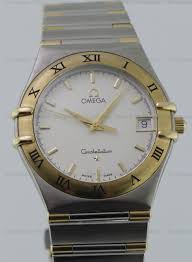 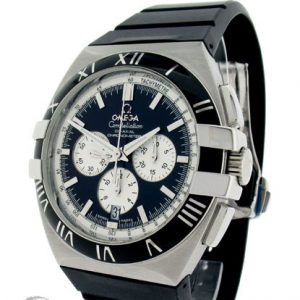