While the Disney Company of today may be a merchandising machine, it was not always this way.  The early days of the Disney brothers’ company saw them often strapped for cash, prompting Walt Disney to first sell merchandising rights of Mickey Mouse to a man he me in a hotel lobby who wanted to sell writing tablets featuring the famous mouse—Disney earned $300 cash from this first deal.  A few years later, Disney was contacted by Herman “Kay” Kamen, a natural salesman with an extensive background in marketing and merchandising for animated figures.  After wooing the Disney brothers with his knowledge of branding and merchandising, the Disneys awarded Kamen’s promotional firm the licensing rights to all Disney merchandising—which it held for two decades and used to earn millions of dollars for the Disneys. 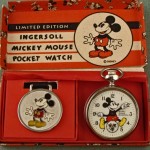 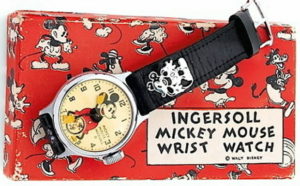 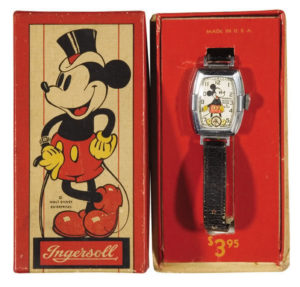 This first series of watches were comprised of a wrist and pocket watch. Both had a picture of Mickey on the dial with his hands animated, telling the minutes and hours, and a small dial at the bottom with three little Mickeys chasing each other as the seconds ticked by.

The Mickey Mouse watch was priced at $3.25 and then later lowered to $2.95. The pocket watch was also made available around the same time for the price of $1.50.

In 1934, Ingersoll of London began marketing the watches in Great Britain with a different design from the ones in the States.

These British watches were sometimes called the “Balloon Trousers Mickey” watch because of the extremely inflated pair of red shorts on the bezel.

In the 1960’s Ingersoll became US Time which then became Timex.

In addition to Mickey on the watches, Minnie also appeared on the watch face, and when this addition proved successful, she got her own watch, just for the girls. 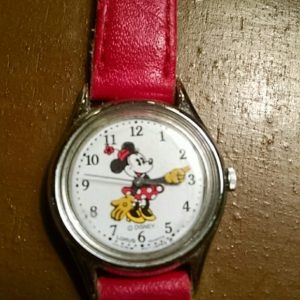 One of the most unique and very collectible “Mickey” watches was produced by the Helbros watch company in 1972. Dubbed the “Backwards Goofy” watch, with numbers placed “Backwards” on the dial and Goofy’s hands rotated counter-clockwise as well.

In the early 1970’s, the Elgin National Industries took over manufacture of the Disney Watches. Their Bradley Watchmakers division took over in late 1972, marketing a premier watch with Mickey’s rotating hands in bright red gloves and a Swiss movement. Bradley continued until 1987 when Lorus took over. Today, many other manufactures produce Mickey Mouse watches in an endless array of styles, graphics, bands etc. Fossil, Seiko, Colibri and the Disney Time Works company brand all now produce beautiful retro and new Mickey Mouse watches. Many other Disney characters adorn the watch line now. There are Mickey alarm clocks, wall clocks and everything in-between.