I had the opportunity this month to work on one of these beautiful watches, so I thought that it would make a great blog post. This watch is a fantastic timepiece, well make and just a real beauty.  It is based on the Hamilton 992B movement with the chronograph function added.  Here is the progression of advances of the Hamilton 992B line of watches.

The watch second hand is at 6 o’clock position. The Chronograph big seconds hand and the register at 12 o’clock records up to 30 minutes.

You push the button on the pendant to start/stop the Chronograph, pushing it a third time will reset the hands to zero. The case was normally a Base Metal Keystone watch case. 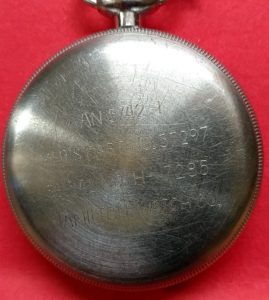 The back is engraved with military marking FSSC NO.-88-W-590 Mfgs. Part No. 37297 Hamilton Watch Co. FSSC 88-W590 is the number of this particular design of watch in the Federal Standard Stock Catalog. The case is normally a Base Metal model made by the Keystone watch company

How the watch works

The Hamilton Model 23 Chronograph was used by all branches of the armed forces but predominantly used by the Air Force during WWII and into the 1950’s Korean conflict.

It was paired with the US Navy Model IV Octant, an aircraft Sextant introduced in 1941. 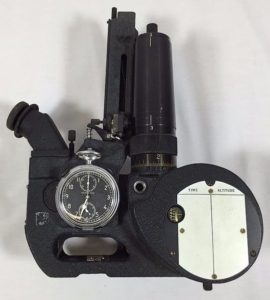 It could be used as a traditional “Ground Speed watch” which would help the Air Force navigators correctly determine the ground speed while in flight. This is important to  properly determining where you are for navigation, safe drop speeds for paratroopers, fuel consumption and obtaining correct speed for bomb drop trajectory.

The Model 23 was most often used It was also used by the US Army Air Force during WW II in conjunction with the Mark III, Model 5 Octant or Pioneer (BendiX Aviation Corp) A-5 or A-7 sextant for navigational purposes while in flight over water where landmarks were not available.

A sextant or octant was used to measure the “altitude” of a celestial body above a horizontal line of reference. (“Altitude” in this case is a special use of the word describing an angular measure, not a distance in feet above sea level.) A mariner can use the horizon as this line of reference, but when an airplane is flying above the clouds or flying at night, its navigator can’t see the horizon. The bubble sextant or octant solves this problem by providing an artificial horizon. It takes its name from an air bubble in a liquid-filled chamber that functions like a carpenter’s level, indicating when the sextant or octant is aligned horizontally.
The navigator would look through the eyepiece of his sextant or octant and locate a star. With a drum on the side of the instrument (like a camera’s focus ring), he would adjust the angle of a rotatable prism until the star showing in the eyepiece is aligned beside the bubble. The prism and drum are geared to circular scales, marked off in degrees. From these scales he could read the star’s “altitude”.
But just as importantly as knowing a reference star’s “altitude” the navigator had to know the exact time that the reading was taken. To do this, before taking the “altitude” reading, the navigator would start the Model 23 at some specific time, say 12:34:00 GCT. Once he had the star aligned beside the bubble in the sextant or octant, he would depress the pendant and stop the sweep hand and record the time of his observation along with the “altitude” reading from the circular scales. Since it was difficult to take a reading on a bouncing airplane, several reading of the same reference star were taken and averaged. To obtain a “fix” usually required observations of three different stars.”

If you have time, take a quick look at my previous blog post on the Hamilton 992B

My Favorite Watch, The Hamilton 992B